Summer markets were suddenly stormy. Europe’s STOXX 600 saw its worst morning in two months and London’s FTSE fell over 2% as Britain’s ‘freedom day’ when it lifted COVID restrictions was overshadowed by its double-jabbed health minister contracting the virus.

Asia had seen Japan’s Nikkei and Hong Kong’s Hang Seng drop 1.3% overnight too. Cases hit an 11-month high at the weekend in Singapore. Thailand had its highest single-day increase since the pandemic began and Sydney’s construction workers were told to down tools after cases rose there as well.

Wall Street futures down nearly 1% although it was good news for those holding safe-haven government bonds or the dollar, which climbed to a more than three-month high.

Natwest’s Global Head of Desk Strategy, John Briggs, said the chances of broader lockdowns being needed again were growing and also China’s economy was slowing, meaning a recent surge in commodity prices could be peaking although oil is now expensive enough to be a weight on many economies.

“Where all this comes out of the wash for me is that with this narrative gaining traction, it is clearly more bullish for the U.S. dollar,” Briggs said.

He said that if COVID-19 cases rise again, factors to consider included which countries have the highest vaccination rates, their appetite for social restrictions and their fiscal appetite.

“The U.S. comes out on top of all these,” Briggs added. “We are in a period of renewed US exceptionalism … So all this is bullish for the USD.”

In Europe’s stock markets, COVID angst saw travel and leisure stocks fall to their lowest level of the year. Shares of cruiseship operator Carnival, airlines easyJet and British Airways-owner IAG, and the UK’s Restaurant Group and Cineworld cinema chain all fell between 5% and 6%.

It wasn’t just COVID crushing the mood either. China’s supersized tech trio Baidu, Alibaba and Tencent had sank 2.5% – 3% overnight after a Shanghai court at the weekend posted a list of “typical unfair competition cases”. 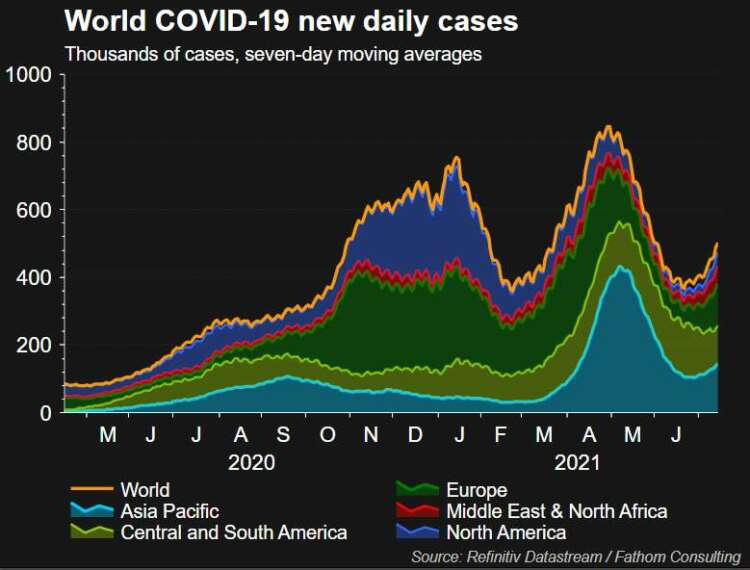 Oil prices sank more than 2% after the OPEC group of producing nations overcame a recent spat and agreed to boost output in a hastily arranged meeting on Sunday.

Global economic growth is beginning to show signs of fatigue as many countries, particularly in Asia, struggle to curb the highly contagious Delta variant of the novel coronavirus and have been forced into some form of lockdown.

Investors are also worried about the spectre of elevated inflation, which the market has long feared.

Economists at Bank of America downgraded their forecast for U.S. economic growth this year to 6.5%, from 7% previously, but maintained their 5.5% forecast for next year.

“As for inflation, the bad news is it’s likely to remain elevated near term,” they said in a note, pointing to their latest proprietary inflation meter, which remains high.

“The good news is … we are likely near the peak, at least for the next few months, as base effects are less favourable and shortage pressures rotate away from goods towards services.”

In bond markets, the move to safe-haven assets meant the recent fall in yields continued. Germany’s 10-year bond yield was at its lowest since late March at -0.369% ahead of an ECB meeting this week. U.S. Treasury yields slipped to 1.265% and have fallen for 11 of the last 15 trading sessions.

Action in the currency market lifted the dollar 0.3% against a basket of major currencies to 92.976.

But it failed to make ground against the Japanese yen – the dollar/yen currency pair traded below the 110 yen per dollar mark at 109.85, leaving the yen 0.2% higher on the day.

Britain’s sterling hit a three-month low against the dollar at $1.3706 after its health minister Sajid Javid had tested positive for COVID-19. That forced Prime Minister Boris Johnson and finance minister Rishi Sunak to quarantine on Sunday.

“Despite rising vaccination rates, a return to pre-corona normality seems questionable,” Ulrich Leuchtmann, head of FX and commodity research at Commerzbank, wrote in a research note.

Europe strains for clarity as Russia stands by...

Poland’s PGNiG in talks to get more gas...

June 29, 2022
We use cookies on our website to give you the most relevant experience by remembering your preferences and repeat visits. By clicking “Accept All”, you consent to the use of ALL the cookies. However, you may visit "Cookie Settings" to provide a controlled consent.
Cookie SettingsAccept All
Manage consent