With risks percolating, “it seems like the winning streak has snapped,” said Edward Moya, senior market analyst for the Americas at OANDA.

Bond yields also were lower as concerns about a revving global economy eased. The yield on 10-year U.S. Treasury notes was down 6.5 basis points to 1.367%. 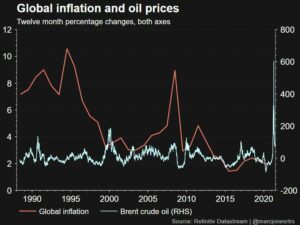 A month ago, yields were widely expected to rise in the second half, possibly reaching 2% by year-end. Now, the consensus thinks yields may have peaked for the year. (Graphic: Oil prices and global inflation, https://fingfx.thomsonreuters.com/gfx/mkt/dgkvlrjorvb/Pasted%20image%201625556400903.png)

Oil pulled back on Tuesday from its recent rally after OPEC+ producers canceled a meeting due to clashes over plans to increase supply to meet rising global demand.

The crude spike was based largely on posturing, since suppliers are still going to increase output, Moya said. “Demand is just too strong,” he added.

Investors will watch for minutes from the U.S. Federal Reserve’s Federal Open Market Committee (FOMC), due Wednesday. The market expects them to confirm a hawkish – or anti-inflation – tilt, and a benign readout could trigger a rally.

The Organization of the Petroleum Exporting Countries (OPEC) and allies, known as OPEC+, abandoned talks Monday after the United Arab Emirates rejected an eight-month extension to output curbs. [O/R]

Some OPEC+ sources said a new meeting would take place in coming days and would lead to a boost in August.

Hong Kong marked its sixth day of losses and China’s CSI300 dipped to an almost two-month-low [.SS], after the Cyberspace Administration of China ordered an investigation into Didi.

China will step up supervision of Chinese firms listed offshore, and improve regulation of cross-border data flow and security, Xinhua quoted the cabinet as saying.

Yes, winning the Euros really can help your...

How to Maintain Positive Psychology while Trading

The fear of inheriting wealth; How a philanthropic...

Most buy-side financial firms struggling to deal with...

Lost in translation: the importance of getting your...

August 27, 2021
We use cookies on our website to give you the most relevant experience by remembering your preferences and repeat visits. By clicking “Accept All”, you consent to the use of ALL the cookies. However, you may visit "Cookie Settings" to provide a controlled consent.
Cookie SettingsAccept All
Manage consent